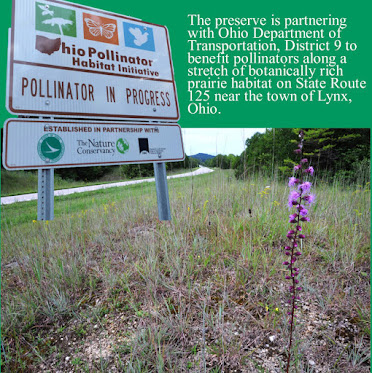 What follows are some of the things preserve staff found in preparation for the first report to ODOT.


Challenges and Future Work
The three major issues in the project area: 1) repeated mowing so that plants don’t get the chance to flower and set seed. 2) Bringing in soil from other areas that is different from the prairie soils on the sites. 3) The soil from #2 contained seeds from weeds that have proliferated. Issues 2 & 3 are particularly noticeable around guard rail posts where weeds are flourishing and where the native plant community has been buried by the added soil giving non-native plants the upper hand to take over. TNC and CMC staff plan to work on some of these issues with the exception of removing the added soil which is just not possible. Weed control and seeding select native species is possible, as well as removing woody plants that are shading the prairie which are particularly heavy in places.

Adams County, Ohio is very fortunate to have this native prairie plant community along State Route 125 near Lynx, Ohio. The people passing through this area will enjoy the roadside beauty and a myriad of pollinators and native plants will benefit as well thanks to the efforts of ODOT, District 9.

Special thanks to ODOT District 9 personnel: Blaine Bradds, Kenny Grooms and all the workers at the garage that keep our highways safe and beautiful.

Posted by Edge of Appalachia Preserve at 8:00 AM

Slug moth caterpillars that is! There are around 5,000 species of butterflies and moths in the eastern US! Wow! For this blog post we'll be focusing on just the slug moth family which has about 30 different species in the eastern US. This is a small but intensely interesting group of moths whose larva look like they are all from another planet. In general, this family of moths, the Limacodidae, are rather small, but what they lack in size they make up in color, form, and absolute bizarreness.
One of the most striking things that is common to members of this family is unique to the caterpillar world. Instead of the normal pairs of pro-legs that most caterpillars are equipped with, they have what are called "medial suckers". This just means that they are equipped with a series of suckers along each side of their ventral, or bottom, surface that allows them to glide along. It's actually really cool to watch.
Another interesting feature that many of the slug moth caterpillars posses is stinging spines. Some are small and inconspicuous, some are retractable, while others are just out there ready for action. Let's take a look at one of the most well known of this family whose stinging spines are large and in charge!
This is the saddleback caterpillar, Archaria stimulea. It is named for the green colored portion of its body which truly resembles a saddle. This caterpillar is what's known as a generalist. A generalist is a species adapted to eating a wide range of plants from multiple families and genera. Like many caterpillars when they are younger, they feed in groups and then later they disperse to a more solitary life.

So about those stinging spines...being a large caterpillar (for a slug moth) this species can pack a punch when touched. Different people will have different reactions, but it can feel worse than stinging nettles but much milder than a bee or wasp.
Butterflies and moths being in the same insect order, Lepidoptera, go through complete metamorphosis. This means they have four life stages: egg, larva (the caterpillar), pupa (either in a cocoon or chrysalis for the most part), and adult (the moth or butterfly). During the larval stage these animals go through multiple instars, or periods between molting. Even though we consider caterpillars to be kind of soft and squishy animals they are still insects and posses an exoskeleton. That exoskeleton is one size and has to be shed periodically in order for that insect (or other arthropod) to grow. For Lepidopterans the larva stage usually has 5-6 instars and the early instars can look and behave very differently from the later ones. The members of the slug moth family, Limacodidae, can have up to 9 instars!
This yellow-shouldered slug, Lithacodes fasciola, has stinging spines up until the very last instar. As mentioned above, the saddleback is gregarious during the first few instars and solitary for the last few. Other caterpillars, notably the swallowtail butterflies, look like fresh bird droppings in the early instars. A great camouflage against predators if there ever was one!

A few of the slug moth caterpillars have a tail. It's not much, but is interesting nonetheless. What is its purpose? Only the caterpillar knows!
Many of the slugs are quite colorful and even within each species there can be a lot of variation. Some of the coloration is wonderful camouflage which makes the caterpillar look like part of the leaf, complete with decaying leaf tissue. Others have bright warning colors advertising their stinging spines.
First up are two of the smaller species, both in the genus Adoneta. They only grow to be about 1cm long during their larval stage. They blend in very well to the leaves they are on. As most of the slug moths caterpillars are mature catts during the late summer and early fall, they are feeding on leaves that may already have quite a bit of insect damage to them. So it is a great adaptation to look like a damaged leaf. Both are generalists, eating  a wide variety of woody plants.
The next species is one of my favorites as it can occur in a wide array of colors. It is the spiny oak-slug, Eulea delphinii. While it does have stinging hairs, it's bright colors does the job of warning others of their presence. If you haven't seen the video of this caterpillar in a previous post, click  here.
Looking rather similar but in a different genus is the stinging rose caterpillar, Parasa indetermina. It is a caterpillar with full saturation of color in either yellow, red or orange. The look is completed with bluish/blackish/purplish pin-striping. I have to say this is always a favorite to find as its color is just extraordinary.

Here is another slug moth caterpillar with coloration like a leaf with some kind of damage to it. The red-crossed button slug, Tortricidia pallia, is one of several in this genus who's identification can be rather tricky.

So far we've seen several types of camouflage such as background matching and disruptive coloration. The Nason's slug, Natada nasoni, relies heavily on background matching sporting this rather lovely green color.
Let's talk about parasitoids. Para-whats? Parasitoids are insects that parasitize other animals (often insects) but in doing so ultimately kill the host. This happens quite a lot in the caterpillar world. Braconid and ichneumon wasps (order hymenoptera) and tachinid flies (order diptera) are most often the culprits. Eggs of these parasitoids are often laid on or inside the caterpillar. Next, the larva of the parasitoid begins to consume its host starting with the non-vital internal parts of the host. In other words, it's eating its host from the inside while its still alive! Eventually, the parasitoid will pupate (hymenopterans and dipterans go through complete metamorphosis as described above) on or inside the host. The host eventually dies and the parasitoid adult emerges to mate and start the process all over again.
Here is a short video clip of some ichneumon wasp larvae emerging from the body of a pawpaw sphinx caterpillar, Dolba hyloeus, and beginning to form their cocoons.
In the case of slug moth caterpillars, they are most often attacked by tachinid flies. The fly will usually lay one egg on the outside of the caterpillar which quickly hatches and the larva burrows into the caterpillar to start feeding. Some of the slug moth catts have white spots as part of their coloration that look a lot like a tachinid fly egg. It could be a deterrent to help fend off the real thing.
Parasitoids play a really important role in the ecosystem by helping to keep caterpillar populations in check. As much as we love hunting for and photographing for them, caterpillars can and will very quickly decimate plants when their numbers get too high.
I'd like to wrap up our trek through the Limacodidae with three, of what I think, are the coolest of all the slug moth caterpillars. First up is the crowned slug, Isa textula. Ringed with translucent branched stinging spines, this catt is aptly named.
All of the factual information about the slug moth caterpillars for this post came from the best caterpillar book ever, Caterpillars of Eastern North America by David L, Wagner. David Wagner's book has done so much to bring caterpillar ID and love to so many people. This book is a wealth of information on moths and butterflies and so very helpful in making IDs.
For the Limacodidae, I was able to post pictures of almost every one listed in the book. Notably missing are several of the button slugs including the early button slug, Tortricidia testacea, the shagreened slug, Apoda biguttata, and the yellow-collared slug, Apoda y-inversum, and the pin-striped slug, Monoeuca semifascia. That's okay though, as it simply poses a fun challenge to find and photograph the ones we're missing!
Posted by: Robyn Wright-Strauss
Posted by Edge of Appalachia Preserve at 1:47 PM 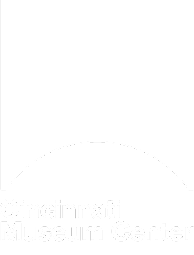